As the Duke of Wycliffe, most people treated Nicholas’s authority as a foregone conclusion.
They did not look him in the eye and demand—the audacity of her, his mother would have said—to know why he’d arrived at his own blasted property.

Even if it was property he’d never wanted, property he’d gone out of his way to avoid until it had become painfully obvious to society that he wasn’t doing his duty. He couldn’t afford the beau monde’s scorn, not if he hoped to have a better session in the House of Lords than the previous Season.

That was what mattered. Not this unsettlingly wild and dark estate, and definitely not Felicity Fields’s lack of respect for him.

After spending so many summers here, he ought to know that Felicity was not like normal people. Since arriving at Tetbery as a child, she’d never left the estate. No trips to London for a proper Season, like her position should have dictated. His aunt had insisted upon seclusion after the death of the earl, and Felicity had paid the price for it.

Not that she’d ever seemed to mind. She said the first thing that popped out of her mouth and did precisely what she wanted, with no repercussions. He envied her for that.

But like this blighted estate he’d never wanted, Felicity was his responsibility now.

So things had to change. Starting with how she spoke to him.

“This is my estate,” he reminded her, matching her coldness with his own brand of disregard—lofty hauteur, perfected from years of reminding people who he was. “And it is, after all, the holidays. I wished to spend it with the people I care about.”

That was true, at least. He cared about Felicity—he just didn’t understand her.

“Then you should have stayed in London, or gone to Wycliffe Manor. Not come here.” She peered down the bridge of her nose at him, making him feel as though he were much, much smaller than he was.

It was clear she did not share his sentiment. He ignored the tiny twinge of hurt at that realization, reminding himself that he did not need her to like him to do right by her.

USA Today Bestselling Author Erica Monroe writes dark, suspenseful historical romance. Her current series include Gothic Brides (Gothic Regency romances), The Rookery Rogues (pre-Victorian gritty working class romance), and Covert Heiresses (Regency spies who are the children of a duke). She was a finalist in the published historical category for the prestigious Daphne du Maurier Award for Excellence in Romantic Suspense, and her books have been recommended reads at Fresh Fiction, Smexy Books, Smart Bitches Trashy Books, and All About Romance. Her favorite things include coffee, profanity, comic books, and television. She lives in the suburbs of North Carolina with her husband, two dogs, two cats.

Death is just the beginning in this dark, emotional Gothic Regency Romance…

After the death of her beloved guardian, Miss Felicity Fields is left adrift, her future uncertain. Grief-stricken, she launches a plan to use the ancient art of alchemy to bring back to life the woman who was like a mother to her. The last thing this blunt bluestocking needs is the return of Nicholas Harding, the Duke of Wycliffe and rightful owner of her home on the wild coast of Cornwall. He stirs an unexpected passion within her, and Felicity has had enough change in her life.
When they were children, Nicholas never understood his aunt’s brilliant but unemotional ward, or her many strange scientific studies. He ought to take her back to London, so she can make a proper society match–except he can’t stop thinking about her. But with the line between life and death blurred by Felicity’s experiments, can he convince her that she’s no longer alone, and her proper place is by his side?
Purchase: Amazon | Barnes & Noble | iBooks | Kobo 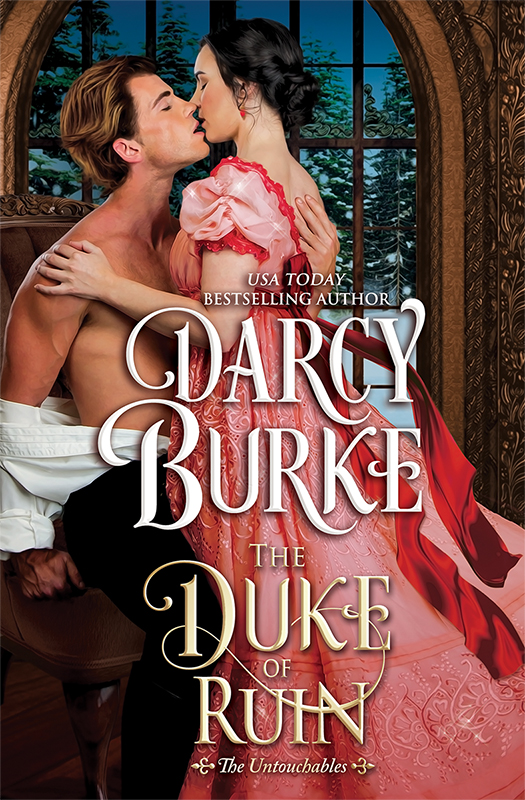 With her betrothal to a duke in tatters and scandal imminent, Diana Kingman has two choices: live in certain ignominy or flee into obscurity. Diana wants solitude. She never wished to wed in the first place. However, her father will stop at nothing to betroth her to one of the finest titles in the realm…no matter how loathsome the bearer. Escape is Diana’s only option, and she’ll pay any price to achieve freedom.

Universally blamed for the death of his wife and unborn child, Simon Hastings doesn’t dispute his guilt over an accident he cannot even remember. He hasn’t had a drink since, nor a moment’s peace. Determined to be a better man, Simon rescues a young woman in need—only to be accused of kidnapping. They must marry to save him from prison. But how can a man haunted by the love he lost and a woman afraid to get too close find happiness together?

Buy The Duke of Ruin Today!
Amazon US I Amazon Universal I iBooks I Nook I Kobo
Add to GoodReads

Darcy Burke is the USA Today Bestselling Author of sexy, emotional historical and contemporary romance. Darcy wrote her first book at age 11, a happily ever after about a swan addicted to magic and the female swan who loved him, with exceedingly poor illustrations.

Join her reader club at http://www.darcyburke.com/readerclub. A native Oregonian, Darcy lives on the edge of wine country with her guitar-strumming husband, their two hilarious kids who seem to have inherited the writing gene, two Bengal cats and a third cat named after a fruit.

Callie Hutton, the USA Today bestselling author of The Elusive Wife writes both Regency and western historical romance, with “historic elements and sensory details” (The Romance Reviews). Callie lives in Oklahoma with several rescue dogs and her top cheerleader husband of many years. Her family also includes her daughter, son, and daughter-in-law. And twin grandsons “The Twinadoes.”
Callie loves to hear from readers. Contact her directly at calliehutton11@gmail.com or find her online at www.calliehutton.com. Sign up for her newsletter to receive information on new releases, appearances, contests and exclusive subscriber content.
Connect: Site | Facebook | Twitter | Goodreads

From USA Today Bestselling Author Callie Hutton is a new captivating and suspenseful historical romance…
Recently widowed, Charlotte Pennyworth is relishing her independence and it rankles to have to rely on a man to help her with an increasingly sinister stalker. Former Yardman, Elliot Baker, is reluctant to take on Charlotte’s case but despite himself and his history with another woman, he is drawn to the bright, attractive widow.
Sparks smolder between the PI and his client but neither is looking to form an attachment. Elliot thinks Charlotte is hiding something. Charlotte has no desire to marry again, especially to a private investigator, no matter how handsome, brave and kind he is. The risk to his life and her heart is too great. But more dangerous than a menacing stalker is secrets and when Charlotte’s come to light, even the passion between them might not douse the flames of Elliot’s distrust.
Purchase: Amazon | Barnes & Noble | iBooks | Kobo